115 men accused of participating in the 2013 attacks of the Joseph Colony in Pakistan were acquitted of all charges over the weekend. Chaudhry Muhammad Azam, the anti-terrorism court judge in the Lahore region where the attack took place, cited lack of evidence for charges of attempted murder, robbery, arson, and/or terrorism.

“This incident not only spread a wave of terrorism in Lahore, but also brought a bad name to Pakistan.”

The Largest Anti-Christian Violence Since 2009

In 2013, about 3000 people descended on the Joseph Colony when one man, Sawan Masih, was accused of blasphemy against the prophet Muhammad. The mob ransacked and set fire to about 125 homes, a number of shops and businesses, a church building, even some motorcycles and rickshaws. Arsonists clashed with police. 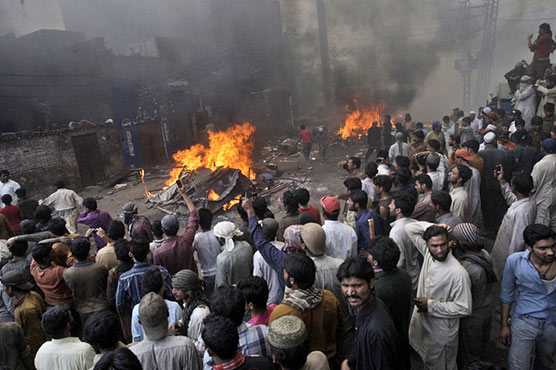 Image from The Indian Express

Hundreds of Christians were displaced. No one was killed. The violence has been recognized as the largest act of anti-Christian violence in Pakistan since 2009.

After the incident, a Supreme Court bench, headed by Chief Justice Iftikhar Chaudhry, reprimanded the government of Punjab and the province’s police for failing to protect members of the minority community. Justice Azmat Saeed Sheikh, a member of the bench, said the violence took place “right under the nose of Punjab Police and there was total inaction.”

Sawan Masih was arrested and charged with blasphemy. He was tried and sentenced to death in 2014.

“Both Imran [the accuser] and Sawan are close friends and the former has made the allegation only to settle a personal score because they had quarrelled over some petty matter.”