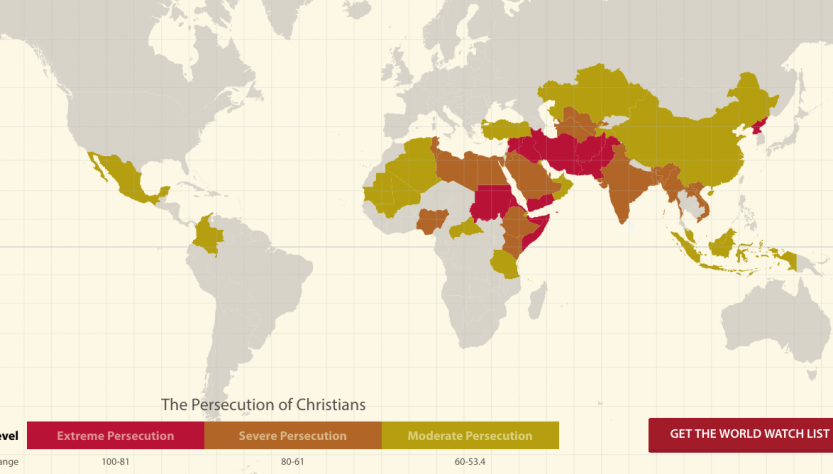 The five countries that top the list for persecution are:

Catch up on the press conference:

“Nearly one in every 12 Christians in the world today lives in an area or culture in which Christianity is illegal, forbidden, or punished. And yet today the world is largely silent on a shocking wave of religious intolerance.”—Dr. David Curry, CEO, Open Doors

“In countries like Nigeria … an average of five churches are attacked every single Sunday.”—Dr. Curry

This is the 16th consecutive year that North Korea has topped the World Watch List.

“North Korean Christians are classified as a hostile class and are seen as traitors. In North Korea, people can be executed on the spot for the simple act of owning a bible.“—Dr. Curry

“No organized church is allowed and every Somali citizen is considered to be a Muslim. If a Christian’s faith is discovered, it means instant death: executed without trial and often on rumor alone.”—Dr. Curry

“Many in Afghanistan who convert from Islam to Christianity are murdered once their extended families learn of their new faith. In other families, Christian converts are delivered to mental hospitals … This can occur even upon the mere suspicion of conversion — a fear tactic that leads family members to react all the more harshly in curbing even the slightest hints of interest in Christianity.”—World Watch List Report